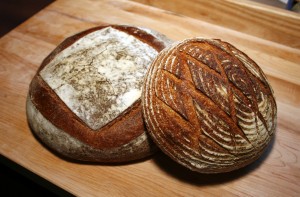 Although only a small percentage of Americans have celiac disease, many more are actively trying to reduce their gluten intake. The reasons for this are wide-ranging, but it’s becoming clear that modern wheat is not the healthiest choice for many people.

But going off gluten isn’t so easy. Some experts have likened it to a drug — it’s addictive.
So what’s the best bread for folks who aren’t ready to quit cold turkey?

Before the advent of commercial yeast, most bread was made in the “sourdough style,” with its signature cavernous holes. Those holes develop during the process of fermentation, which traditionally happened, at the very least, overnight. During the fermentation process, good bacteria breaks down the gluten proteins, thereby reducing or even eliminating the gluten content all together.

A team of scientists in Italy in 2010 showed that gluten content was much lower in breads that were made in the traditional, old-world style. The difference was so stark that celiacs in the study were able to consume the sourdough with no ill effects. (Could this be why so many of my gluten-sensitive friends do fine on bread and cheese in France or love the pizza in Italy?)

Most commercially made bread in America (even those branded “sourdough”) goes from mix to bread in a matter of hours. Without the longer fermentation time, you may not get the same value. Microbes take time to do their work!

I have gotten into trouble with celiacs on this site before, so I will add a caveat to this:
Sourdough bread may not be right for you!

A range of gluten levels will have a range of impact on different digestive systems. No doubt there are many celiacs who cannot stomach sourdough. Another thing to keep in mind: bread of any variety may not be an ideal choice for people looking to lose weight or get healthier.

For most people, perhaps sourdough can be a good “transition” bread, making it easy for them not to have to go cold turkey on gluten. If nothing else, our understanding of microbes and food continues to be a fascinating topic.

Given that in every city and country around the world, the microbial makeup of the air is unique, perhaps those people who say historic San Francisco sourdough can only exist in San Francisco are right!

Tips:
1. Get to know your local baker. Store bought sourdough will likely not cut it if you are sensitive, sourdough or not.
2. Make it yourself. It’s a fabulous opportunity to learn (or teach) about microbes and their beneficial action!
3. For those who are super sensitive, you can even make gluten free sourdough.